A second piece of information also came to light recently. I was aware of a story about an original Rife machine schematic which had something to do with Dr O.C. Gruner of Canada who worked with Rife throughout the 1930's on isolating a fungal form of Rife's cancer microbe 'BX". This latter form was given the name "Cryptomyces Pleomorphia". Dr Milbank Johnson was anxious to find an MOR for this form of cancer as he believed that much better results in cancer cases could be achieved if they could kill Cryptomyces with the Rife Ray. Johnson hassled Rife constantly for 2 or 3 years to find the MOR of Cryptomyces, however no record exists to show if Rife ever did find it, and the apparent difficulty he was having, as evidenced in various letters by Dr Johnson seems to indicate that he never did find it. Milbank Johnson ran several clinics in and around Los Angeles in the late 1930's, giving treatments with the Rife Ray. At first he used the original Rife Ray No 4 machine, but later he used another machine, details of which were not apparent from his letters. It appears it was a prototype machine of some description from around 1936 and built by Phillip Hoyland. Eventually, in an attempt to find the MOR of Cryptomyces, Johnson apparently shipped this machine to Dr O.C. Gruner in Canada, so Gruner himself could try to find the MOR. There is no clear record of what happened after this. I am aware of an anecdote that says that Gruner got scared of offending the Canadian medical establishment and never actually used the machine. It was said that he eventually gave the machine to a friend of his, a priest, who cannibalised the machine for his ham radio hobby. However, there was also a story that somehow Gruner had produced a schematic of this machine and had sent it to John Crane in the early 1950's, but nobody I was aware of had seen this schematic.

In 2001 Stuart Andrews came across an original document which was a confidential report by John Crane, for internal circulation only within the Rife labs. In that report (on page 6) Crane tells the story in more detail. In particular he says:

"In 1950, John Crane met Roy Rife. After learning how Rife had cured cancer in the 1930's but had seen his cure suppressed by the AMA, Crane decided to commit his energy, will and electronic and mechanical knowledge to bringing the cure for cancer to the public. Dr Gruner of Canada, who worked with Rife in the '30's provided Crane with one of the original circuit designs for the Rife Ray Tube. Crane also hired Verne Thompson, an electronics expert with the San Diego police force, to help construct the new Frequency Instruments.Unfortunately, Rife had enlisted the help of electronic experts in the '30's who never wrote down the details of the instruments. Rife was unable to duplicate the marvels of his earlier Frequency Instruments. The instruments were completed by Crane and Thompson in 1953, but the test results were negative."

We immediately started attempts to locate this schematic, without any success until purely by luck, Jeff Garff managed to obtain photographs of the original schematic. Jeff sent them to me and I sent copies to Bob Harrison for analysis. With Bob's help I redrew the schematic (as did Bob himself) with a few minor corrections. Crane had redrawn Gruner's papers and made some mistakes in the process (or maybe they were Gruner's mistakes) but in any event they were minor and obvious.

Those schematics and associated data are linked below. I would like to extend my thanks to Jeff Garff, Bob Harrison and Stuart Andrews for their help in obtaining this, the credit belongs to them, not me.

The Gruner Schematic
Below I have reproduced a photograph of the original Gruner Schematic as taken by Jeff Garff, Bob Harrison's corrected engineering drawings of the same, and finally a PDF file containing my modern redrawing of the schematic. Please note that we don't have all the component values, they were not on the original schematic. Despite this, it is easy to see that it is in fact a classic Hartley MOPA type design almost identical to the 1939 Beam Rays machine in the output stage. The modulator section is very strange but clearly would produce a modulation in the low audio range.

There are some notes on the original schematic in John Crane's handwriting. In the lower left corner is a functional diagram of a Hartley oscillator. From the notations on it, it is clear that someone was trying to explain to someone else that the circuit was a true Hartley. The fact that it is a Hartley is not obvious, as in the case of the 1939 Beam Rays machine, because the plasma tube itself forms part of the capacitive tuning loop for the output. If a capacitor were substituted for the plasma tube the design would become a classic Hartley.

In the lower right hand corner of the schematic are some further notes by Crane which give specifications of the plasma tube and some other notes as follows:

The plasma tube is described as being a phanotron type tube, a 7 inch diameter, 3 litre Pyrex Flask, with electrodes 1 1/4 inches in diameter placed 2 inches apart in Helium at 12mm pressure. I believe this is the definitive description of the early Rife/Hoyland plasma tubes and this specification is fairly critical for optimum operation.
The Crane notes go on to say: By John F. Crane 3-5-51 (Verne Thompson's name also appears to one side). From O.C. Gruner MD's records from Milbank Johnson and Rife and Hoyland's conception of Rife Ray tube Frequency Instrument - 1951

I present the data below. 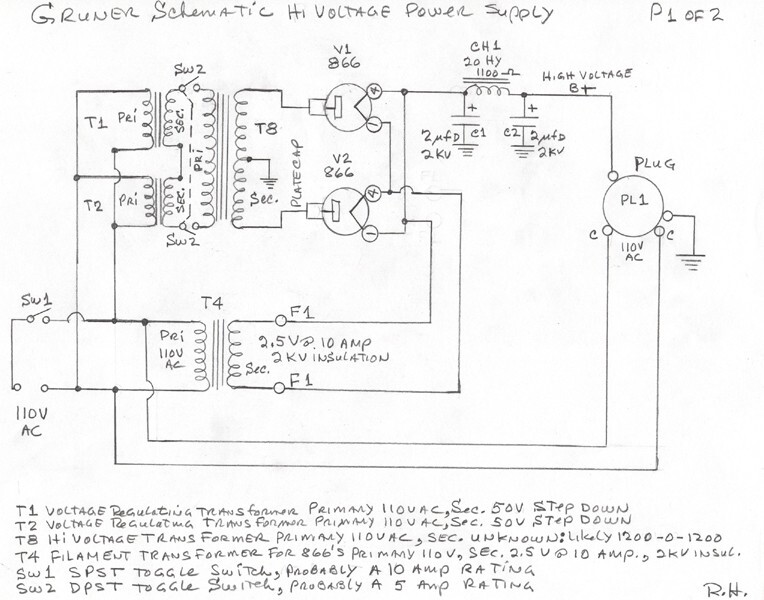 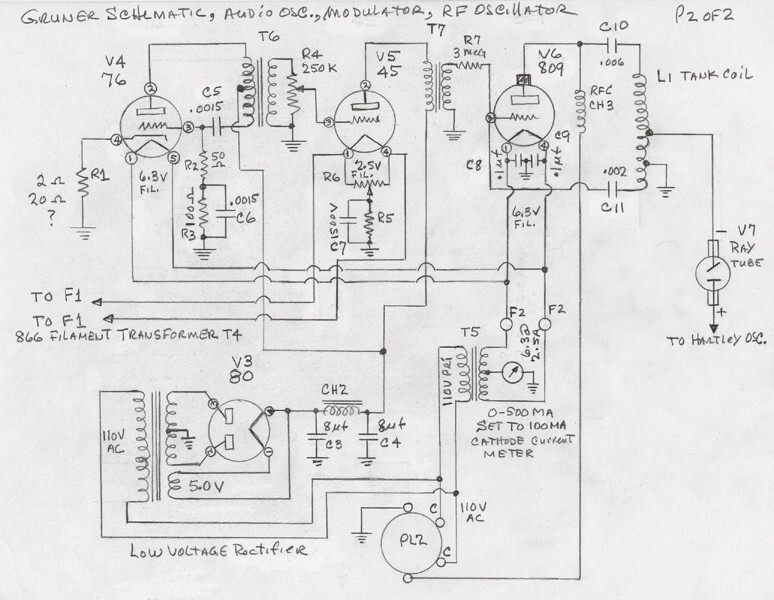 (c) Copyright Aubrey Scoon 2002-2009  - Mirror of information from www.scoon.co.uk
The opinions stated on this page are those of Aubrey Scoon (1960-2009). They do not necessarily reflect the opinions of anyone else assocaited with www.rife.de.